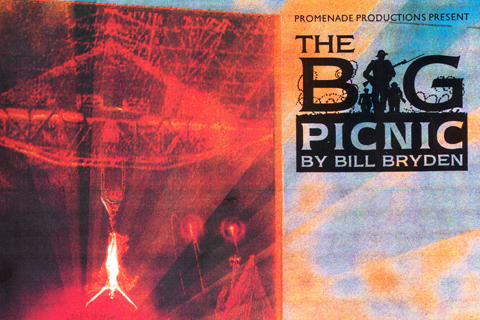 Bill Bryden’s promenade production celebrated the lives of a group of young Govan volunteers during the Battle of the Somme in 1916. The feat of engineering and creative endeavour to produce this epic production at the Harland & Wolff Engine Shed was seen by over 80,000 in Govan and millions more when it was broadcast on BBC2 in 1994 and subsequently in 2016 and has remained vivid in people’s mind to this day.

Bill Dudley, the show’s designer wrote about it:
“The Battle of The Somme and the subsequent trench warfare on the Western Front from 1914-1918, stamped the then-new 20th Century with its most enduring image: No Mans Land, that lethal wasteland of devastation which signalled the end of both innocence and faith with its sudden destruction of the natural world and human life by a completely new and terrifying mechanised process. It was this, strangely visual event that we wanted to describe and commemorate 80 years later and where better, we thought, than Harland and Wolff where we had staged The Ship in 1990. The shed seemed to contain the very essence of the early 20th Century machine age so appropriate for this most grim industrialised war.

In researching this piece, I have been struck by a paradox of trench warfare which many poets and artists have described and that is the terrible beauty of it all, particularly at night with the searchlights and starshell tracer bullets and gas clouds playing over the underground city of the trenches. We have tried to evoke this eerie firework display whose effect was so sinister, despite its beauty and scale. My own grandfather was gassed on the Somme but he would never talk to me about it. In working on our show, I have come closer to understand what he went through.”